Liv loves Danny. She knows she loves him more than he loves her, so she lets him go without a fight when his parents make him move back to America. She knows she will never love anyone like she loved him, but she has to move on.

Danny loves Liv. He knows he loves her more than she loves him, because she does nothing to get him to stay, so he goes quietly when his parents leave the UK. He knows he will never love anyone like he loved her, but he has to move on.

Twelve years on, they have made a good job of pretending, they may have almost forgotten. But when they get in touch via Facebook, it seems that it is all still there.

They quickly find that they are intensely compatible in ways they hadn’t even begun to explore before they were forced apart.

Can they put aside their fears and give it a go? Or will deep rooted doubts and insecurities tear them apart?

Erica's Review:
I loved Liv! She was so cool. I wanna throw that out there first thing. Her spunky personality was my favorite part of the book. Don't get me wrong, Danny was great, but LIV...Liv...would totally be my BFF in real life.
Just Human is about Liv reconnecting with her childhood sweetheart, Danny. They had a special love when they were younger, but when Danny's family moved back to the U.S., they had to let their relationship go. 12 years later they reconnect through Facebook. I loved the social networking aspect of the book.  I found myself giggling while reading their flirty messages. I get frustrated when books leave out the texting/cell phone communication aspect of relationships. When characters are like "I have no idea where he is? How do I find out?"  I'm thinkin'.... what is this? The Stone Ages? Pick up your cell phone and call the man! My point is, it was a realistic take on modern day relationships and that was refreshing.
My third favorite part of the book was that first sex scene. HOLY. HOTTASTIC! (new word). It was so freaking hot. Sexy. Hot. There was no...let's ease into the sex part of the book.....It was...BOOM! Let me throw you right into this freaking hot scene without testing the water. AND I LOVED IT.  Danny and Liv were lighting up the pages with their blazing scenes! 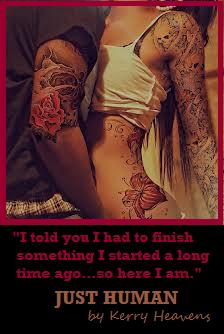 I liked the first half of the book the best. Things are pretty much hearts and flowers for the last half. When you hit about 95%, shit hits the fan. Yep, you are in for a cliffy with this one. I have to say, it's not THAT bad. I mean, they'll be ok. I know that. Logically I know that it's going to be fine. I've read some pretty brutal cliffhangers and this one doesn't rank that high on the cliffhanger scale. On a scale of 1 to Sins & Needles by Karina Halle, you're looking at a about a 4. I'd rank it right below Beauty from Pain by Georgia Cates.  --I realize this scale makes no sense, but do you get me? Yeah? Great! :)
In other words, the cliffy won't leave you in need of therapy like when you finished reading Collide by Gail McHugh. haha! It'll just leave you wanting more. Overall, this was a sweet and sexy story and I can't wait to find out what happens with Danny and Liv in book 2.
Reviewed by:


a Rafflecopter giveaway
Posted by Gutter Girls Book Reviews at 12:01 AM