Blitz and Review: All I Ever Wanted (An Abbott Springs Anthology #1) by Marilyn Brant, Caisey Quinn, Rhonda Helms, and Lexi Ryan

ALL I EVER WANTED, a new adult winter anthology 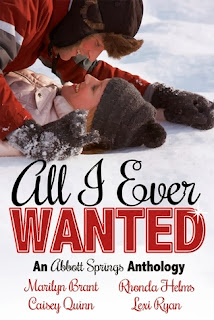 Winterfest is heating up in Abbott Springs...
As the town’s yearly festival kicks off, cold days turn into steamy nights, new flames will be ignited, and old romances will be rekindled.


All About Us by Marilyn Brant—All Sami Abbott ever wanted was permission to be herself. At home, she aims to be the perfect daughter but never measures up. At college, she’s the bold girl who had a one-night stand with sexy musician, Alex Hamilton. When he arrives unexpectedly in Abbott Springs, her worlds collide and she must reconcile the girl she tries to be with the person she really is.

All I Need by Caisey Quinn—All pink-haired rocker chick Everly Abbott thought she wanted was acceptance in her straight-laced hometown. But her best friend and bandmate Justin Cohen is about to show her that what she thinks she wants isn’t necessarily what she needs.
All for Love by Rhonda Helms—All Maya Monterey ever wanted was to belong. Happiest with the Abbott family, Maya’s been secretly in love with sexy pastry chef Oliver Abbott for years. With a flirty new look, she’ll pull out all the stops to get him to notice her. And if her plan fails, she’ll walk away from the only home she’s ever known—and Oliver—for good.
All or Nothing by Lexi Ryan—After years of placing the wrong bets, all Aubree Baxter wanted was someone to take a chance on her. Golden boy Kennedy Hale plays it safe in life and love, but to keep Bree in Abbott Springs, he’ll have to go all in.

**Limited time release week sale price of 99 cents!**
BUY :Amazon
REVIEW
When I first saw that this book was being published, I was like "What the heck is an anthology?"  I was told that it was a collection of short stories and I was like "Oohhhh! Well why didn't you just say that?"  :)   And what a cute collection of short stories it was! I totally enjoyed it. Every once in awhile I sit down to read and don't have a ton of time. I hate starting something that I can't finish, so a short story or novella are exactly what I'm looking for. That's what's so great about this anthology; you can sit down to read one and come back to the rest later.
Each story is about a different couple that is in Abbott Springs for Winterfest. They all interconnect a little but are mostly their own little story. I enjoyed each of them but really, really liked stories 2 & 4. Stories 1 & 3 are more about "good guys" (hehe). They were super cute! On the other hand, stories 2 & 4 were about the "bad boys" (*evil grin*). They seemed a bit edgier and well...you know I have soft spot for my bad boys!
I have to brag about my favorite author, Caisey Quinn, though. She has yet to write something that I don't like. I love her style. Her writing just grips me and she never lets me down. She managed a fight, angst, and sexy time in a short story (like 20% of the book)!! *claps hands* *jumps up and down* Fangirl down.
All in all, this was a great read and I'm really glad I read it. This introduced me to some great authors that I had never heard of before, and I can't wait to check their other stuff out!  I know I didn't sum up the plot in this review, but the synopsis does a pretty good job of that. If your looking for a quick, engaging, well written book with FOUR romances... well, you found it and I recommend it!
4 stars!

From ALL ABOUT US by Marilyn Brant

My mind rushed back to thoughts of the two of us in October. In Alex’s hotel room. In that king-sized bed.
The way he’d kissed me until I’d felt lightheaded. Like I was levitating.
The way he’d run his fingers across my belly and I could feel the calluses on his fingertips. Rough and gentle at the same time.
The way our bodies found a perfect rhythm together. And how I’d purposely disrupted it when I pulled away that night. He was getting too close. Too close to knowing the real me, even though I’d given him all the wrong details.
“So, ready for some pizza?” he asked, steering me back toward the town square and the Italian restaurant he’d picked out for our dinner. Giovanni’s. As the only really good pizzeria in Abbott Springs, I’d been there hundreds of times, but never with Alexander Hamilton. Somehow I knew he’d make everything about it feel like a brand-new experience.
“Sure,” I said, moving closer to him. Hoping he wouldn’t take back his arm and break the connection between us.
He didn’t. Not until we were almost at the entrance of the restaurant and a man cleared his throat loudly behind us.
As we turned, I heard an all-too-familiar voice say, “Sami. How are you doing, sweetheart? Going to introduce me to your new friend?”
Alex took a good look at the man standing tall on the sidewalk a few feet from us and immediately lowered his arm.

From ALL I NEED by Caisey Quinn

“We should probably get back,” I said softly, knowing that if I leaned forward so much as an inch my lips would graze his. My chest must’ve been desperate for attention because it rose between us, thrilling at the contact when it brushed his.
“We probably should,” he agreed without moving.
I knew it was wrong, dangerous even. Justin Cohen had been my everything since…well since the first time he’d scooted his backpack over on the bench so I could sit next him at lunch. Sixth grade. He’d been my best friend, my band mate, my shoulder to cry on, my sweet, always-willing-to-listen best buddy ever since. Nearly ten freaking years.
But there was nothing sweet about the way he was looking at me now. His playing doctor on my ankle had been sweet. This was…something else.
Hunger hooded his eyes as we each waited for the other to make a move. The full weight of the fact that I wouldn’t stop him if he kissed me, the undeniable truth that I wanted him to, pressed down on me, but I held my own. His hands slid up my thighs, not an accidental graze but an intentional friction between our flesh. It was delicious torture, a kind I’d never known before. Painful and slow and sweet and…necessary.
This will change everything.

From ALL FOR LOVE by Rhonda Helms

Maya tightened her jaw and looked dead into my eyes. “Everything I love most in this world is in this town, Oliver.” Her voice hitched, and she swallowed. “How could I ever want to leave it?”
The air locked in my chest. My head rushed and buzzed with the hum of a thousand words battering at my brain. It was one thing to have your sister tell you how someone felt about you. Another thing to have the woman herself looking up at you, practically admitting those feelings.
Maya blinked, ripped her gaze from mine, and gave an awkward laugh, a dark flush stealing across her cheeks. “Oh, God,” she said on a broken sigh. “I…I can’t believe I just…”
Before I even realized what I was doing, I dropped my nearly empty cup and captured Maya’s face in my hands then pressed my closed mouth against hers. I felt her stiffen in shock for a brief moment, her cup plopping to the ground near mine, then sigh and melt into me like butter simmering in a hot skillet. She opened her mouth and drew me in, and I savored Maya for the first time.
Her scent, her taste drugged me instantly. Beyond the spices of the alcohol lay something deeper, something feminine that made me ache for more.

From ALL OR NOTHING by Lexi Ryan

A flood of light jerked me from sleep. I wanted to draw up the covers and go back to the dream. I wanted to send away the noisy light-bearers, whoever they were, but then I heard Kennedy’s voice and sat up in bed before I even remembered where I was.
“Who are you?” I asked, my eyes heavy, my voice crackling with sleep. Was I in Kennedy’s house or—
It all came back to me. My impulsive flight to Ohio. The cab ride to Kennedy’s small college. His roommate showing me to his room.
But this wasn’t my plan, falling asleep, being disoriented. I’d never planned for the leggy blonde standing next to Kennedy, her eyes bugging out so much I feared they might pop out of her head.
I blinked at her. Trying to understand why she might be here. Then two things happened at once: I remembered I was naked, and the blonde turned to Kennedy and slapped him across the face.
“What the fuck, Bree?” Kennedy growled. The blonde was already storming out of his room, and from the anger on his face, I could only assume her exit didn’t exactly work with his plans for the evening.
His words hurt, but not as much as the aggravation on his face. I guess I’d thought he’d find me nude in his bed and say something like, “Finally,” before pressing his mouth to mine and pulling his clothes off as quickly as possible.

a Rafflecopter giveaway
Posted by Gutter Girls Book Reviews at 12:00 AM