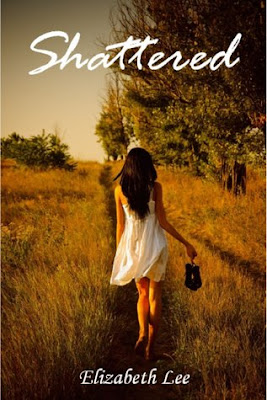 SYNOPSIS
Alyssa Boyd had big plans. Big plans that included getting the hell out of the little town she’d grown up in with her two best friends. When she decided it was time to let one of them know her true feelings for him; a change of plans resulted in a tragic turn of events. Now, Alyssa is left alone to find her way out of the darkness that an untimely death has left in its wake.

Jesse Vaughn was never good at letting people in. He’d learned a long time ago that it’s easier that way because people leave, or, unfortunately, die. The one person he wanted to let in doesn’t want him anymore. The only problem is he can’t stop thinking about her. Jesse returns to the childhood home he left behind with one goal in mind… to convince her that they should be together.

When Jesse finds Alyssa she’s not the same girl he left behind. She’s wild, reckless and hell-bent on not giving Jesse a second chance. Lucky for Jesse, his stubborn streak has always been a mile-wide and he’s not about to give up on her.

When your life has been shattered can you really pick up all the pieces and move on?

PURCHASE LINKS:
AMAZON
B&N
Review:
5 stars!
If I have a book type, this is it. I was pretty sure I was already crushing on Elizabeth Lee, but...
OH.
MY.
STARS.
Now, I am in all kinds of crazy book love with her! I am just so impressed with the writing in this book. As much as I loved Give Me Something, to me Shattered is on a completely different level. Her meticulous attention to detail in this book blew me away.
Her WORDS. I loved her words!
Seriously, the girl has mad writing skills! As sad as this book was at times, I couldn't help but laugh at some of the clever sayings and references that were thrown in throughout the whole book. The writing was gracefully addicting and heartbreaking all at the same time! I couldn't get enough of Jesse and Alyssa and I desperately wanted them both to be happy. Let me give you a little insight to their story... 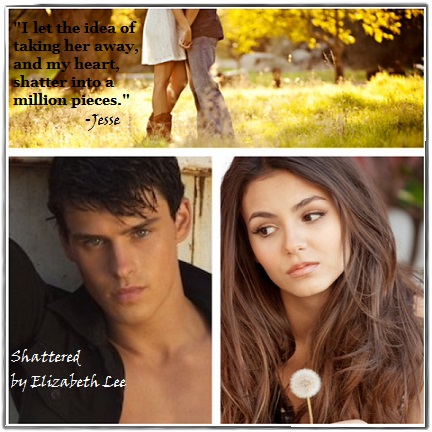 "I didn't care. I didn't care about what I was wearing. I didn't care that my hair wasn't clean. I didn't even care that I was walking out the door wearing traces of yesterday's makeup. This was a problem with me, Alyssa Boyd. I just didn't care"
*Spoiler free*
Alyssa is all kinds of heartbroken . She's lost the two most important people in her life. Both were her best friends, but she was only in love with one of them. The catch is...one left her by choice and the other didn't. Alyssa is grieving over one boy and harboring anger towards the other. She can't deal, so she's fallen into some very self destructive behavior.
"As much as I wanted to get back to the living, I couldn't escape the dead."
Jesse has only ever had eyes for Alyssa. He left town heartbroken and has just now worked up the courage to return to town to fight for the only girl he's ever loved. The only problem is that the girl he left isn't the same anymore and she's not letting him back in...
"Until I saw those brown eyes, I could have cared less about wanting a girl to notice me."
Alyssa and Jesse are two very stubborn characters. If you're looking for angst, come on down! As frustrating as all the misunderstandings and misconceptions were, I thought they were all very real. They are both very young and have already experienced way more pain and heartbreak than they should have ever had to experience so early in life. The tragedy they suffered left them both broken and confused.
There was only one instance that I got pretty irritated in the book...and it was with Alyssa. I just wanted to shake her and say...Seriously, girl...SLOW. YOUR. ROLL. Cut the drama and enjoy all the yumminess that is Jesse Vaughn. 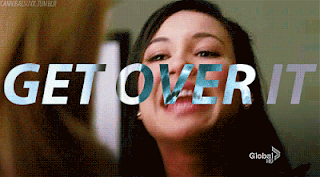 She was all "I can't do this anymore." AND I was all "Jesse, will you marry me?!" I really don't get what she was all torn up about. He was ready throw down for her and I thought it was hot. *fans self*

Overall, I thought this was an incredible read. I adored the flashbacks and alternating POV's! They added so much to the story and gave it so much more meaning and depth. You should know, there were some very sad moments in this book. My stomach dropped and I had chills in one very crucial scene.  For some reason, it's the books that make me hurt the most that seem to be my favorites. How messed up is that?! :) Also, I loved the small town vibe.
My disclaimer: Before you read this and go all "Erica, where's the heat on me??" let me go ahead and forewarn you that you're not going to find loads of heat in this book. This book is all about depth, pain, love, and character development. I'm not all about heat and often prefer the slow burn reads the most. Sometimes heat is way overrated if you ask me! Don't worry, things heat up once you get to around the 70% mark. If you appreciate good writing, this book is perfect for you.
Funny Quotes:
"Unfortunately, the only country songs I heard these days were the sad, my wife just left me and took the dog, kind of songs."
"She's cute. You wanna talk to her?" Garrett leaned in next to me, breaking my concentration. "Or do you wanna take her picture? It'll last longer."
"There wasn't much to do in a small town on a Saturday night, but one thing that you could always count on was having a drink."
"Buzzkill. I knew my friend was looking out for me, but I need another mother like I needed a hole in my head."
"When Luke Bryan told you to "shake it," by God, you shook it." AMEN SISTA
"I could hear my conscience trying to speak up, telling me this is not a good idea. I needed more alcohol to gag the nagging voice."
﻿
Reviewed by:

ABOUT THE AUTHOR
ELIZABETH LEE