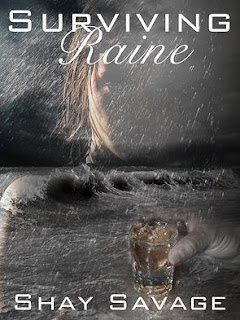 Synopsis
As the captain of a schooner catering to the elite on the Caribbean Seas, Sebastian Stark does his best to avoid any human encounters. Interacting with people isn’t his thing, and he prefers the company of a bottle of vodka, a shot glass, and maybe a whore. There’s no doubt he’s hiding from a checkered past, but he does well keeping everything to himself…

…until the night his schooner capsizes, and he’s stuck on a life raft with one of the passengers.

Raine’s young, she’s cute, and Bastian would probably be into her if he wasn’t suffering from alcohol withdrawal. As the days pass, DTs, starvation, and dehydration become the norm. Even the most closed person starts to open up when he thinks he’s going to die, but when she realizes their traumatic pasts are connected, it’s no longer the elements that have Bastian concerned.

He has no idea how he’s going to Survive Raine.


Mix together addicting, gut-wrenching, gritty, heartbreaking, and heartwarming and you'll get Surviving Raine.  This story took hold of me and didn’t let go, not even once! From snarky Bastian’s mood swings to sweet as sugar Raine’s breakdowns, I loved every page.
I’m going to start my review post shipwreck and tell you a little bit about my new book boyfriend....

The story is told from Bastian's POV. One thing that Bastian knows how to do is survive. When he and Raine are thrown to sea after the shipwreck, Bastian saves Raine’s life. One thing you should know is that Bastian doesn’t care about anyone but himself. He’s a self-proclaimed asshole that drowns himself in alcohol and sex every day. Of course, that’s sex that he pays for because no way is he going to put forth the effort to charm a woman. Not a chance. Bastian is so crass. A fun fact about me is that the more inappropriate something is, the funnier I think it is. Everything Bastian does and says is inappropriate! I hung on his every word!  His asshole words hurt me so good.  ;)

"It's not you," I said. "I'm just a moody asshole, remember?"
Things get interesting on the life raft, because Bastian may have survival skills, but can he survive alcohol withdrawals in such treacherous conditions? That’s where it gets even better…he’s already an asshole AND then you take his alcohol away?! It. was. awesome!  While Bastian is struggling to survive his withdrawals, Raine does what she can to take care of him. Bastian is out of it most of the time, but when he wakes up to Raine comforting him he starts to feel things he's never felt before. Things he doesn't understand. The question of whether or not he'll survive being a castaway turns into whether or not he can survive Raine... 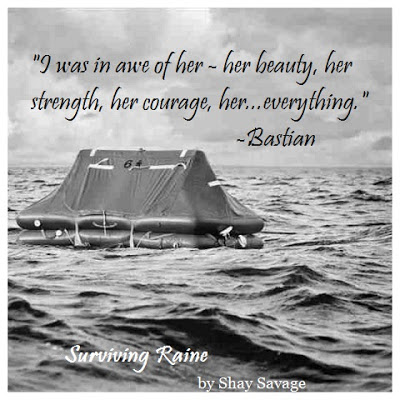 "I've seen you, Bastian." Raine's voice was low, soft, and unmistakably confident.    "I've seen you. Not who you pretend to be, not who you try to hide behind, not the drunken whore who uses booze and women to try and forget everything in his life. I've seen the real you. Please, Bastian. Please don't hide from me anymore."
Raine begins to break through Bastian's walls and makes him realize that much of what he believed about life wasn't actually true. He has a lot of revelations throughout the book. Bastian has a devastating background and is a very broken man. He has a lot of skeletons in his closet and he slowly bares them all to Raine. A. LOT. of secrets come out. Some were downright shocking. Bastian has some really primitive like moments and my jaw was on the floor through a couple of chapters. He was like an animal!
"I closed my eyes and tried to take some slow, calming breaths, but it just didn't help. If slow, calming breaths were of any use, I would have quit smoking."
﻿ 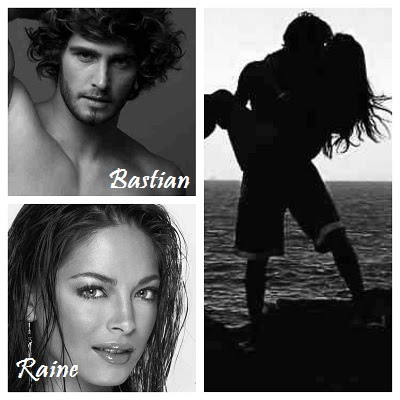 In the end, Bastian is his own worst enemy...can he overcome his own demons in order to hold onto Raine? Is he changed man?
"You are forgiven, my strong, beautiful, gentle idiot."
This is another one of my favorites of 2013! I just couldn't get enough of the story and was eager for more when I got to the last page.  I tried to conjure up more of Bastian and Raine on my kindle...but it didn't work. The good thing is that there HAS to be another installment. It didn't end with a cliffhanger, but it definately set the story up for more! I'm down for more!  Move this baby on up on your TBR lists. NOW!
Reviewed by: